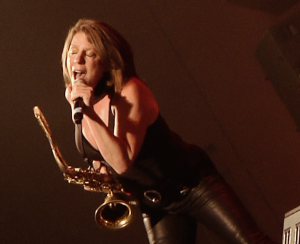 Kirsten Nash has often been called a “Renaissance Woman”. This Canadian multi-instrumentalist and vocalist has played saxophone and sung with touring acts such as Long John Baldry, Alfie Zappacosta, as well as playing in countless bands, jamming with performers such as Stephen Stills, Boz Scaggs, Jeff Healey and Tom Jones over the years in Vancouver. She has been a member of the iconic West Coast favourites, the R&B Allstars for over 25 years and won the CARAS West Coast Music Award for Reed Player of the year in 1988.

Throughout the span of her colourful musical career Kirsten has always created visual art; from ceramic sculptures to oil and acrylic paintings, she has explored her own soul as well as that of the world around her, often embracing her love of music with her subjects. The first half of 2016 will see Kirsten’s paintings in two exhibits in Vancouver. She has also had poetry published in the Red Berry Literary Review, and is currently working on a book set in a fictional Vancouver Island small town, called “River’s End”.

Kirsten’s first CD was the critically acclaimed “Bridging the Gap”, released in 1994. Upon returning to live performance and the studio after a hiatus to raise her children, she recorded her second CD, “The View From Here”, released in 2012, followed in 2014 by an EP called “Salvador Dolly”.

Kirsten released her latest EP, “A Feather and a Scale” last year receiving great acclaim and radio play, and has been performing her music in Vancouver while she moves forward on her art career. Her paintings have been published in several magazines, and international art books and she had a great and successful show at Art!Vancouver in the spring of 2016. Kirsten’s work will be shown at the Red Dot Art Fair at Art Basel in Miami at the end of November 2016, and she has just finished opening her first online site to showcase and sell her art based KNASH home and fashion line.

Never a dull moment in KNASHville 🙂